If you’re interested in using GMac you probably already know about Geometric Algebra. Before using GMac, or any other GA-based software, a firm mathematical GA background is needed. Eric Chisolm’s paper is a very good introduction to start with. A more detailed view of the subject can be found in these books:

More GA resources can be found in the GA Online Resources page. I’ve written my own GA introduction specific to the way I thought while creating GMac. This guide is not intended to explain GA but rather to point out the basic mathematical constructions using which GMac is implemented as a software system. In other words, the focus is on the GA math-related software infrastructure of GMac, not on the GA math itself.

GMac deals with Geometric Algebra mathematical constructions like frames, multivectors, and outermorphisms. To symbolically represent and manipulate these mathematical constructs in software, we need to use a significant amount of organized symbolic processing that can only be provided practically by a Computer Algebra System (CAS). If you read the GMac System Guide, you find that symbolic processing is a core component of GMac. Currently, the computer algebra system GMac depends on is Wolfram Mathematica.

Inside the GMac system, there is a namespace called SymbolicInterface that contains the necessary code for interfacing with Mathematica from .NET in a well managed OOP way. In addition, the namespace called GMac.GMacCompiler.Symbolic extends the SymbolicInterface classes to implement symbolic processing of GA frames, multivectors, and outermorphisms. In addition, the GMac.GMacUtils namespace contains some static utility classes for implementing basic mathematical computations needed for GMac to represent and manipulate GA basis blades using bitwise operations on integers, among other fundamental functions. This guide will explain the connections between the classes under these namespaces to GA computations. The classes under these namespaces can be used for any other project as a symbolic implementation of GA computations. You can use GMac itself to generate a solid numeric implementation for any desired GA space as explained in the other GMac Guides. 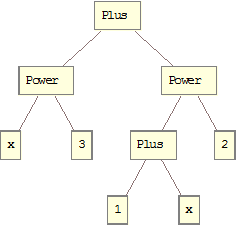 Most computer algebra systems deal explicitly with a single type of data: the expression tree. For example, in Mathematica the expression x^3 + (1 + x) ^2  is internally represented as the shown tree. The system operates by manipulating such expression trees, following mathematical logic laws, to create other meaningful symbolic trees. For example, the system can substitute the number 9 for the symbol x in the tree and evaluate the whole expression using some sort of tree-visitor algorithm to obtain the value 829 for the whole expression. Many symbolic algebraic manipulations can be done using this simple technique. To enable the system to handle new algebraic constructs not already defined, like geometric algebra, you need to define two things:

We can also define new algebraic rules from old ones. For example, we can define a symbolic structure for complex numbers, say Complex[r, m], taking two real numbers, and then define the addition, product, division, and all other complex algebra operations using operations in real numbers.

The main problem with this approach is its conceptual distance from Object Oriented Programming (OOP) used in systems like GMac. I had to create a layer of classes that stores internally Mathematica’s expression trees, while providing an OOP interface for GMac. The SymbolicInterface project contains the main classes for this particular purpose. My intent is to gradually create a unified interface for systems like GMac to communicate with several CAS like Mathematica, Maple, SageMath, SymPy, etc.

Under the SymbolicInterface.Mathematica namespace we find 4 classes serving the purpose of the OOP interface with Mathematica:

The exact members and methods of these classes will be frequently updated as the future needs dictate.

Since everything in Mathematica is an expression, we can’t depend on the Expr class to distinguish operations logically applicable to one type of expression or the other. For example, Expr objects can represent:

Naturally, each of these conceptually different entities has its own set of operations and relations with other entities not captured in the Expr object at compile time; only at run time depending on the exact tree structure in the Expr object. The solution to this problem, a serious one in OOP systems, is to create a wrapper class hierarchy around the Expr objects to capture the differences at compile time. The base class of the wrapper hierarchy is the MathematicaExpression class under the SymbolicInterface.Mathematica.Expression namespace.

The MathematicaExpression class can be used by itself to hold and simplify any arbitrary Mathematica Expr tree object. Several classes inherit from this class to represent different kinds of common symbolic expressions like real scalars, real vectors, and real matrices along with properties and methods appropriate to each. The MathematicaScalar class, for example, is used extensively inside GMac code for manipulating scalar coefficients of multivectors and other GA-related constructs.

MathematicaScalar and Other Expression Wrapper Classes

Under the SymbolicInterface.Mathematica.ExprFactory namespace we find several classes for creating Expr object trees in an OOP manner:

Following the MathematicaExpression wrapper class hierarchy we explained before, GMac has a set of wrapper classes to represent GA frames, multivectors and outermorphisms. Mathematically, a geometric algebra can be constructed from a real vector space and a symmetric bilinear form to define the metric used to compare vectors and associate geometric properties with them like lengths and angles. Using GA’s coordinate-free relations we can create many compact and geometrically significant models and algorithms for scientific and engineering applications. Implementing GA is, however, coordinate dependent because computers basically deal with real numbers and coordinates relate the abstract multivectors to the concrete real numbers. To make that link we define a Frame which is an ordered set of basis vectors for the vector space extended by the Outer Product into an ordered set of basis blades for the geometric algebra. An infinite number of frames can represent the same GA just like a single vector space can be spanned by an infinite number of basis sets. Each frame is based on n linearly independent vectors to construct a 2n dimensional geometric algebra. The n vectors relate to each other using a symmetric Inner-Product Matrix that defines the bilinear form of the GA space. A multivector is simply represented as a linear combination of the frame’s basis blades. All operations on multivectors like the geometric product, outer product, inner products, reverse, etc. can be performed using this simple additive form of multivectors on the selected frame. More details can be found in my introduction to the topic here. 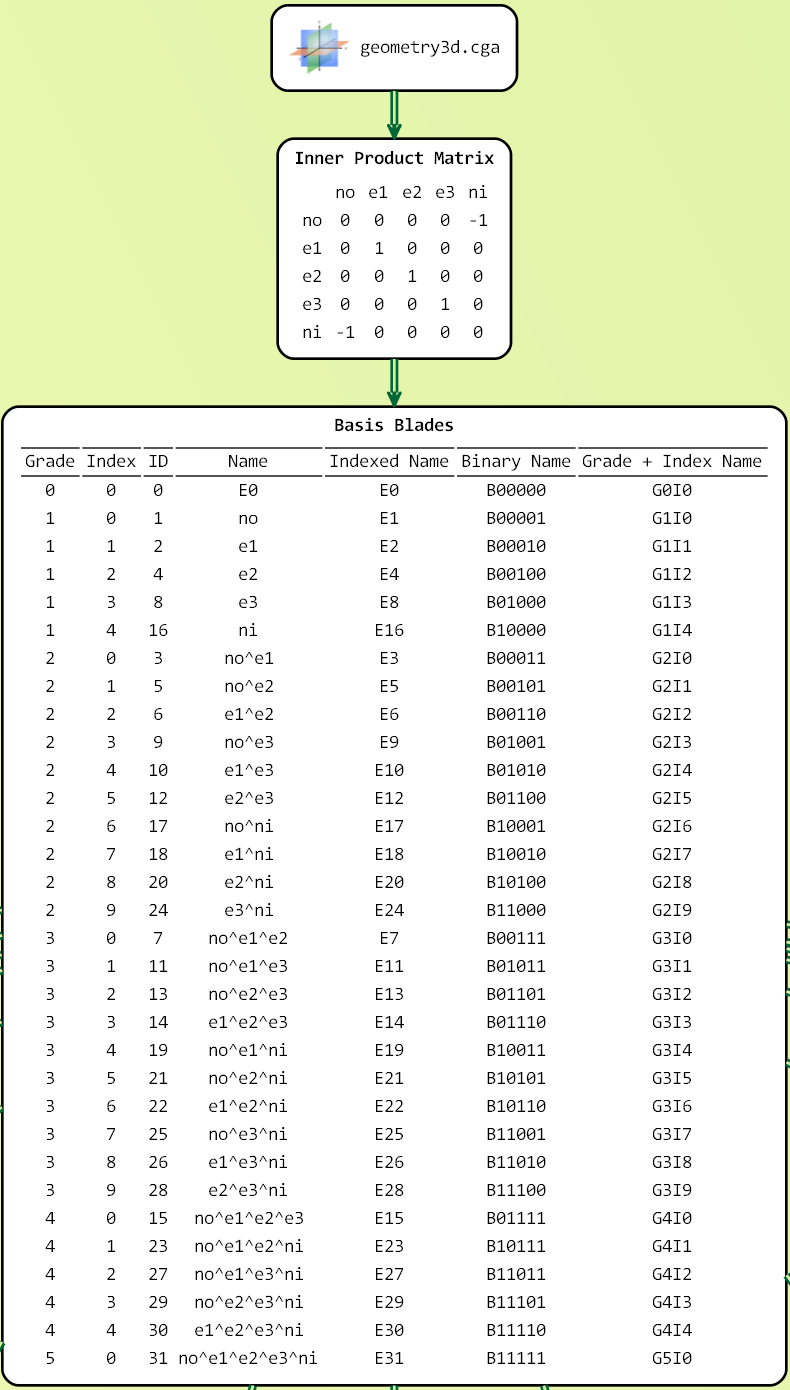 In GMac we can find many bit-wise operations on integers implemented under the GMac.GMacUtils.BitUtils static utility class. These utility operations are the lowest-level implementation related to GA in GMac. 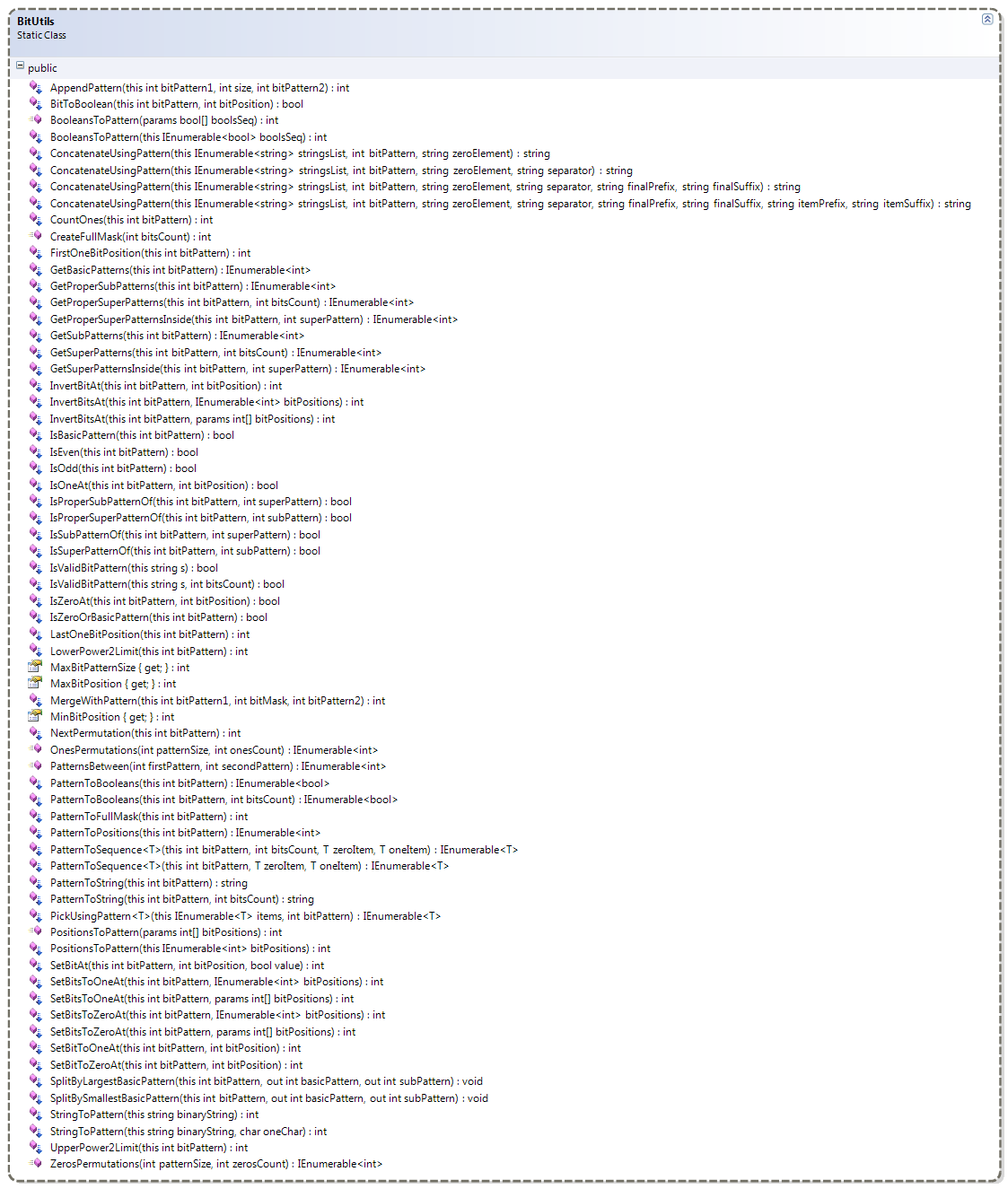 Based on the bit operations, the FrameUtils class contains many operations related to general GA frames. In addition, GMac contains some classes implementing an interface called IGMacFrame. The IGMacFrame interface is implemented by the AstFrame class, described in the GMacAST Guide, and the GaFrame abstract class described in the next sub-section. This interface has many extension methods in the FrameUtils static class to query important properties of GA frames like its GA space dimension, a list of grades its blades can have, the IDs of its basis blades and much more.

The GaFrame abstract class under the GMac.GMacCompiler.Symbolic.Frame namespace is the base of GA frames implementation in GMac. For any GA frame, we need to define its basis vectors in terms of their number and inner products. The InnerProductMatrix member contains a square symmetric matrix holding this information for all kinds of GA frames. Four derived frame classes are implemented in GMac:

For more information about how to use frames and multivectors in GMac see the GMacDSL Guide and the GMacAST Guide. 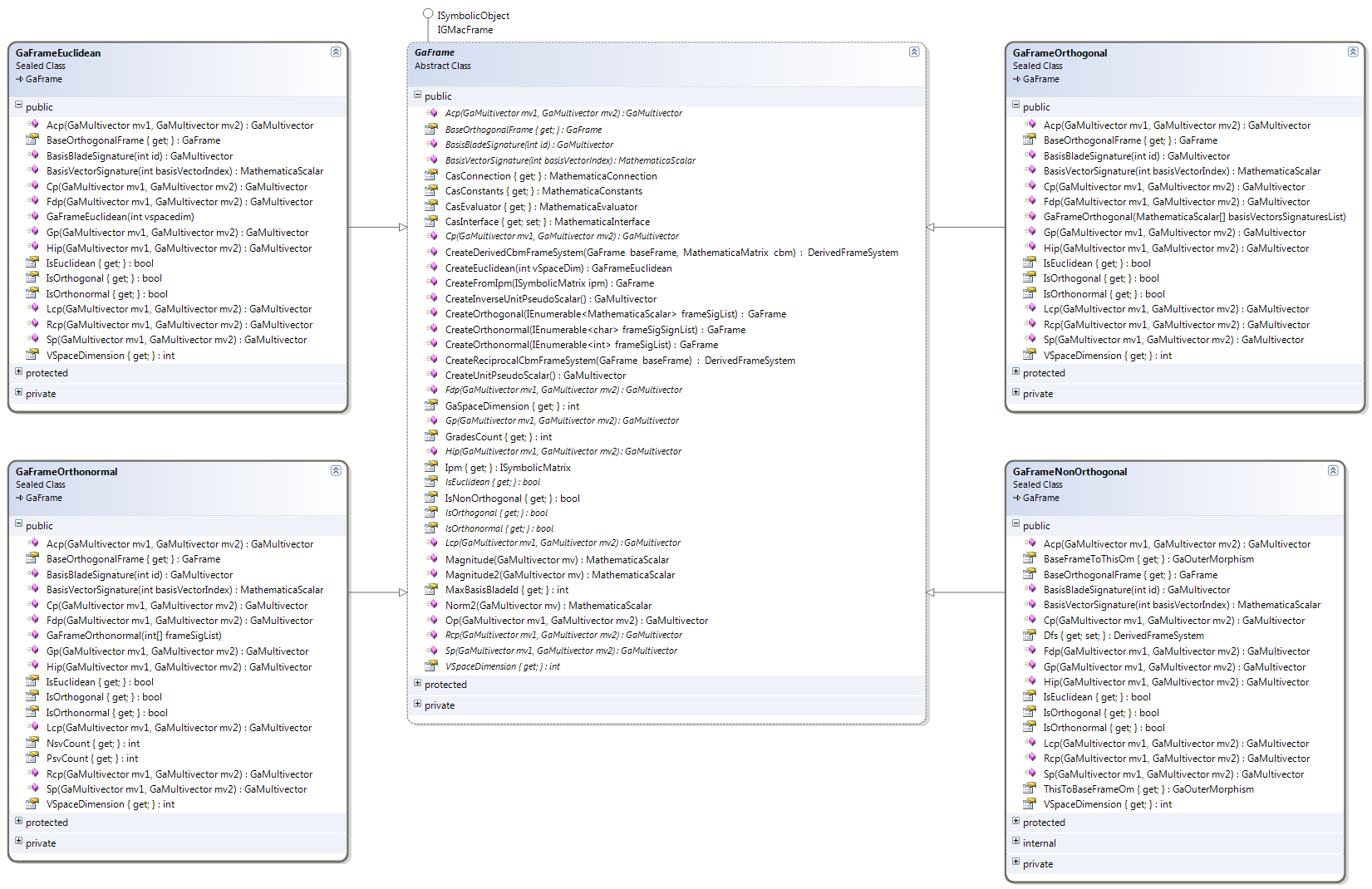 The GaFrame Class and Derived Classes

Many operations on multivectors are independent of the frame, like addition, subtraction, outer product, multiplication by scalars, reverse, grade involution, and component extraction. For these operations, we find methods in the GaMultivector class to implement them. For the frame-dependent operations like geometric product and contractions, we use the frame methods to get the results. The EuclideanUtils static class under the GMac.GMacUtils namespace contains some extension methods to compute products on multivectors assuming a Euclidean metric. 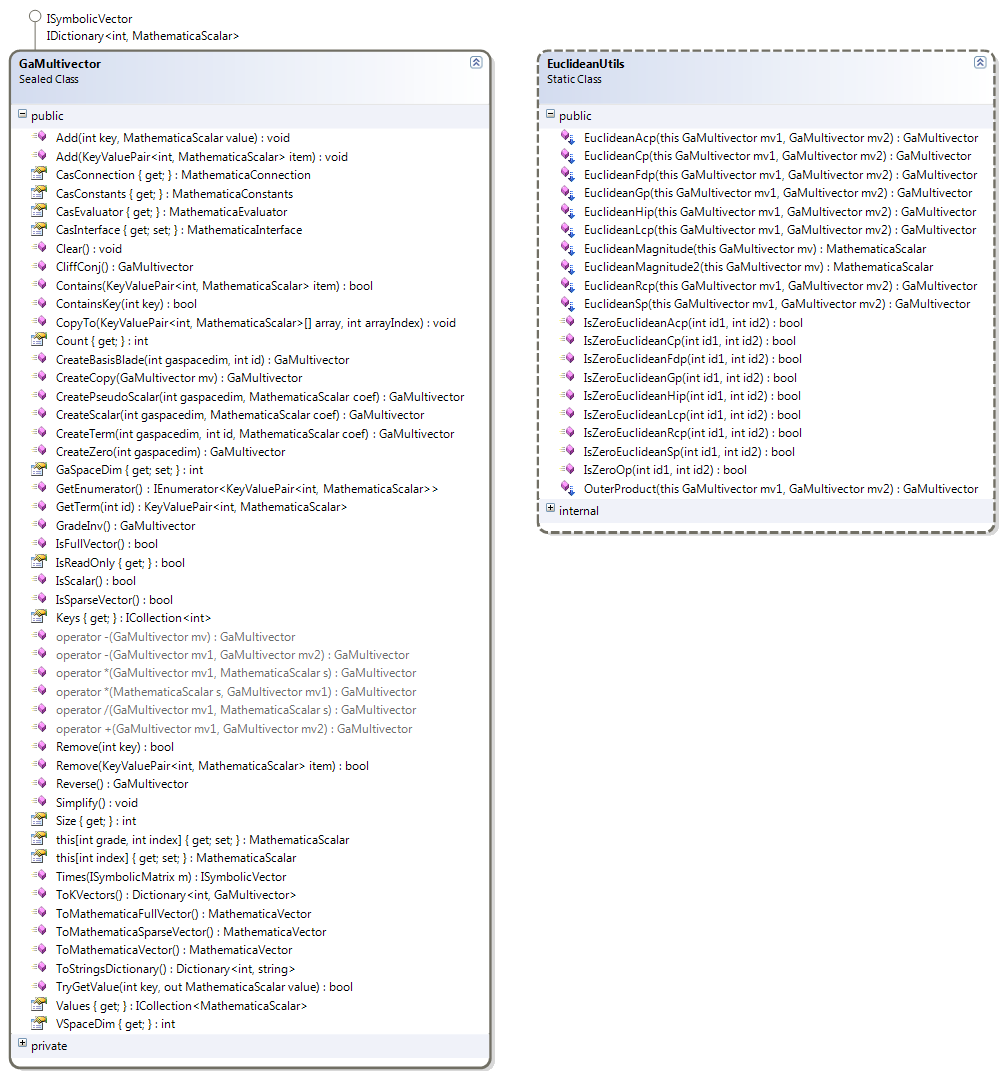 A geometric algebra is actually a vector space of high dimension. Multivectors can be seen as linear combination of linearly independent basis blades satisfying all axioms of a classic abstract vector space. this is why all linear operations on multivectors are representable as matrices. A general Linear Transformation (LT) on multivectors is represented in GMac as a matrix with an arbitrary structure that transforms a multivector between two frames linearly. The GaLinearTransform class under the GMac.GMacCompiler.Symbolic.GALT namespace is the base class implementing general LTs on multivectors. 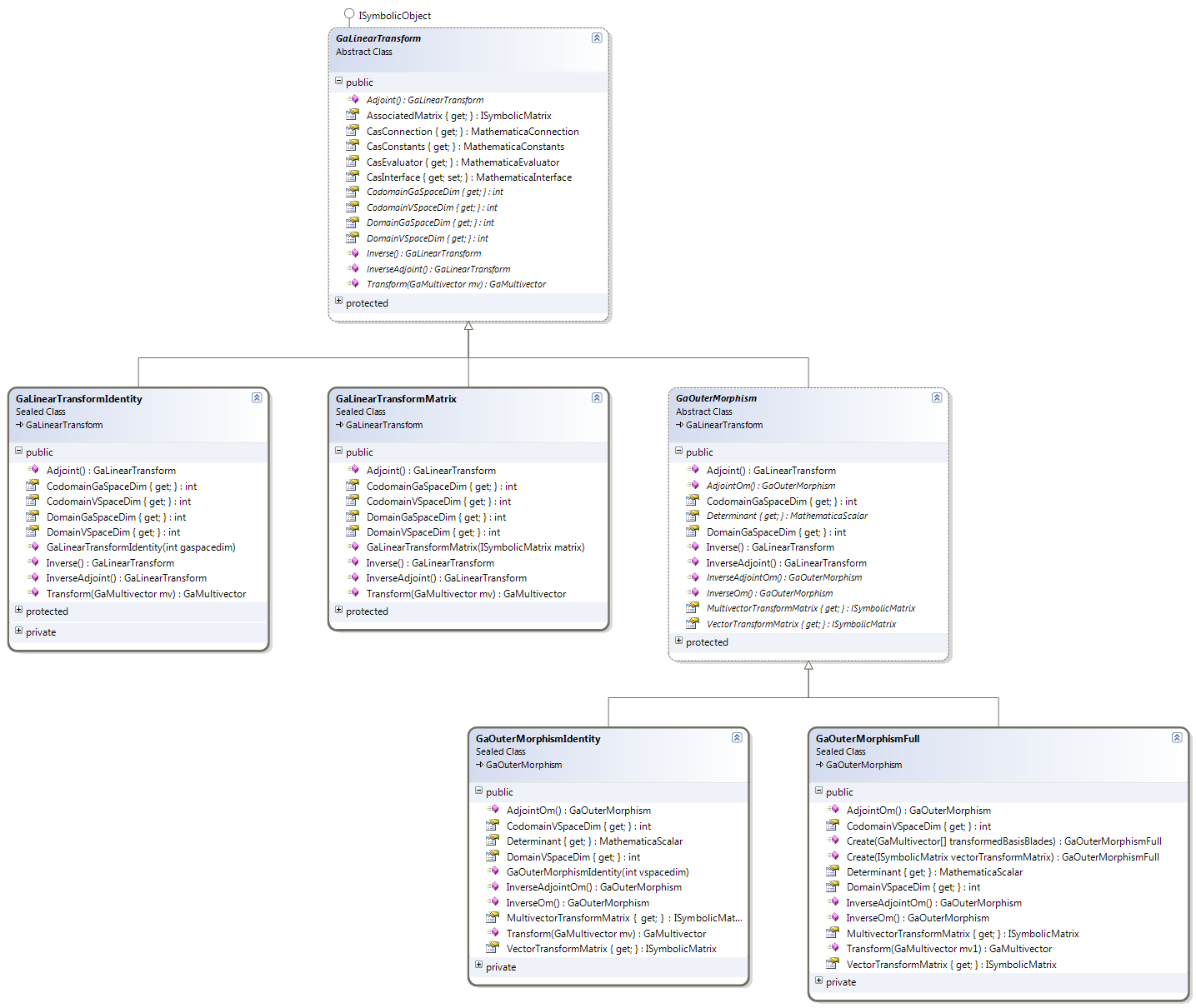 The GaLinearTransform Class and Derived Classes

One very important special kind of multivector LTs is the Outermorphism (OM). An OM is a generalization of a LT on the basis vectors that preserves the grades of the blades it transforms. A general LT can transform a 2-blade into a 3-blade while an OM can only transform blades to same grade blades. This fundamental property of OMs has many useful applications. The GaOuterMorphism class under the GMac.GMacCompiler.Symbolic.GAOM namespace is derived from the GaLinearTransform class to implement symbolic OMs in GMac infrastructure.