In this guide we will explain the details of GMacAST by covering the following points:

Sample code used in this guide 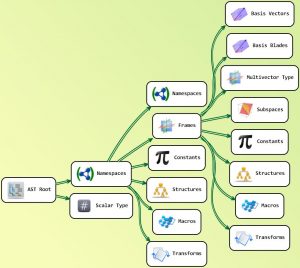 GMacAST is an intermediate data structure constructed by GMacCompiler from GMacDSL source code. GMac uses this data structure as the primary source of information for final code generation. Understanding the structure of GMacAST is fundamental to using GMac creatively. GMacAST is, in fact, simple to understand once we get familiar with GMacDSL since GMacAST nodes correspond closely to GMacDSL code elements. The GMacAST data structure is a tree of heterogeneous nodes all derived from a single base class and implementing a small set of simple interfaces. The main nodes of the tree are:

To represent the nodes in GMacAST many classes are used. All these classes are derived from a single base class called AstObject. The GMacCompiler actually generates an internal AST structure that GMacAST is a wrapper around. The internal AST structure is complicated and is intended for parsing and compilation rather than query and code generation. GMacAST classes are intended for simplicity and efficiency of queries related to code generation. The GMacAST classes can be found under the GMac.GMacAST namespace.

We will not go back to the properties of these interfaces when we talk about each GMacAST node class implementing them. In each class we describe we will point out the most important of its members while giving a detailed class diagram showing all public members.

The AstObject class has 5 derived classes that we will explain shortly:

The AstRoot class, inherited from AstObject class, holds all information relevant to the root of GMacAST and general child node access information. The main members of this class include: 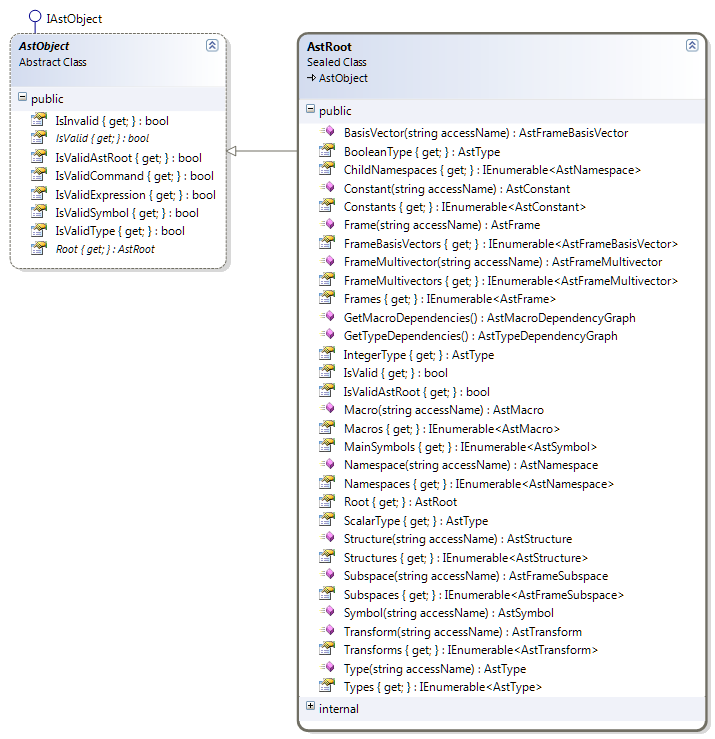 Symbols are the main entities in GMacAST. In GMacDSL namespaces, frames, structures, macros, constants, and many other code concepts are represented as AST symbols. All GMacAST symbol nodes have common properties that are present in the base class for all symbol nodes: the AstSymbol class.

This class is the base class of all GMacAST symbol nodes as shown in its class diagram. The most useful class members include:

This class is a collection of, non repeating, AstSymbol objects useful for code generation and symbol grouping operations. The class includes the following helpful members: 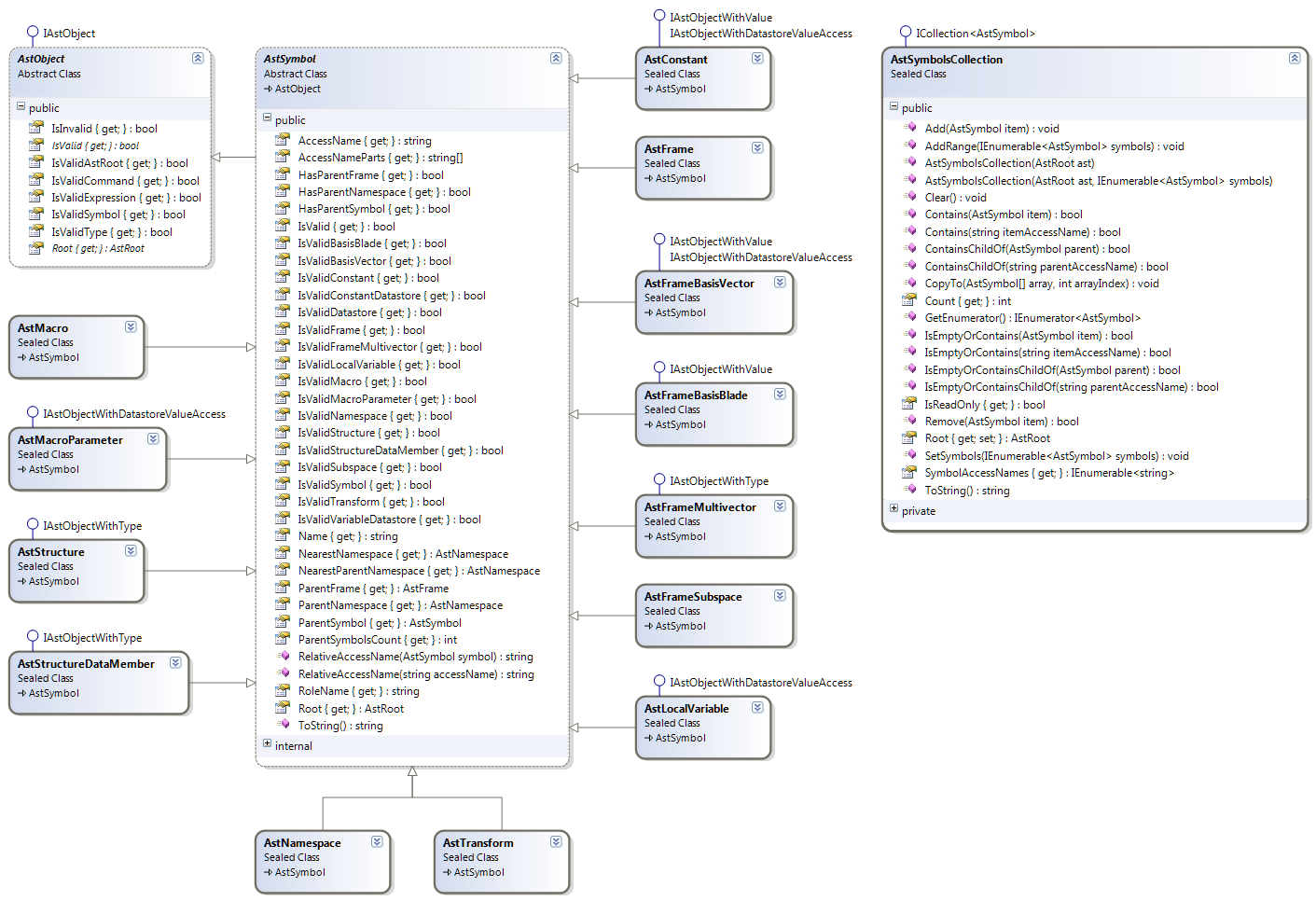 This GMacAST node class corresponds to GMacDSL namespace code element. The main members of this class include: 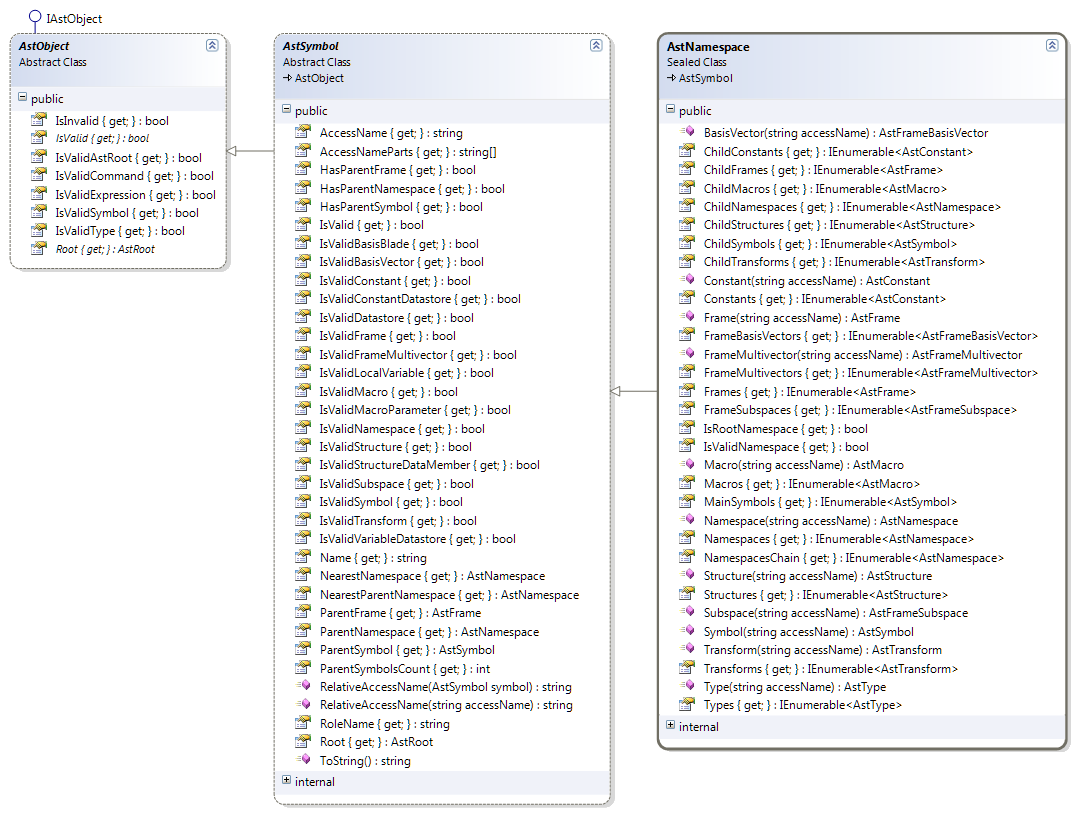 Defining GMacDSL frames is the basis for all GA-related computations in GMac. In GMacAST, the AstFrame node class and related classes are responsible for holding all information related to frames. The main members of this class include:

The second figure illustrates the contents of the AstFrame node object and its related objects for the geometry3d.cga frame in the sample code provided in the top of this guide. Note that some elements in the shown graph are automatically generated or computed by GMac during parsing and compilation of GMacDSL code like the subspaces G0, G1, G2, G3, G4, and G5 for example. 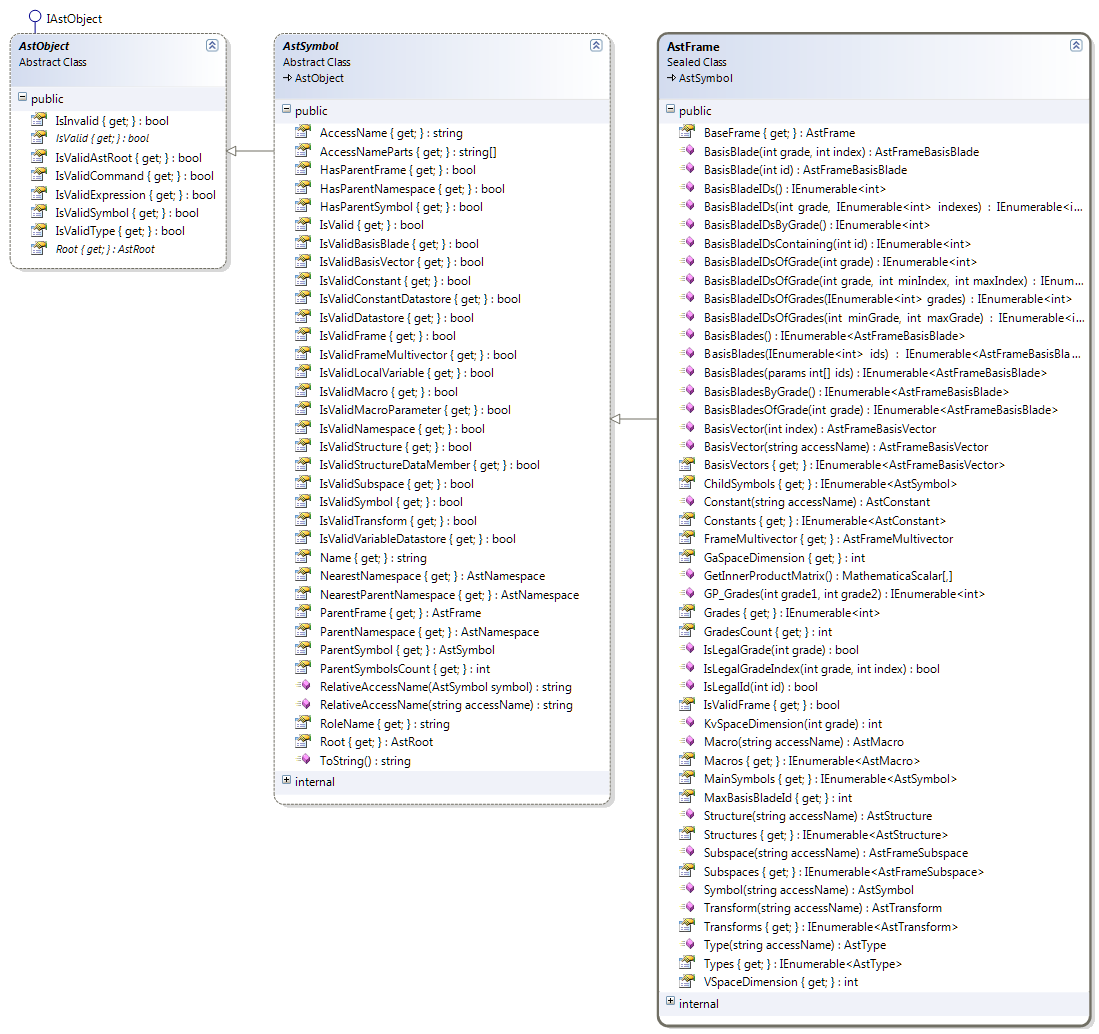 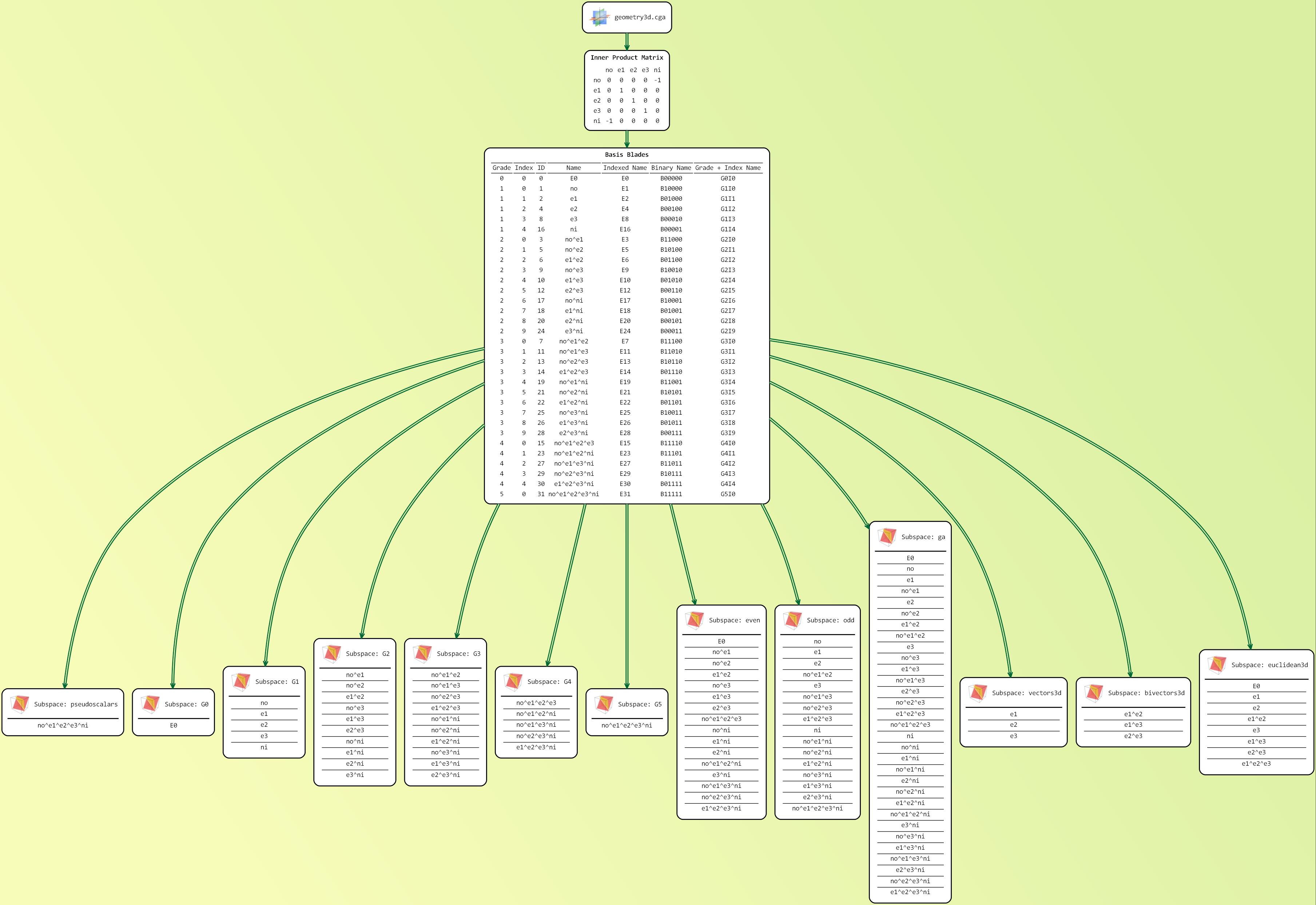 A graph representation of the AstFrame and some related objects in the sample code of this article.

Whenever a a frame is defined, GMac automatically defines an associated multivector type inside the frame. The AstFrameMultivector class represents this multivector type. The important members of this class include: 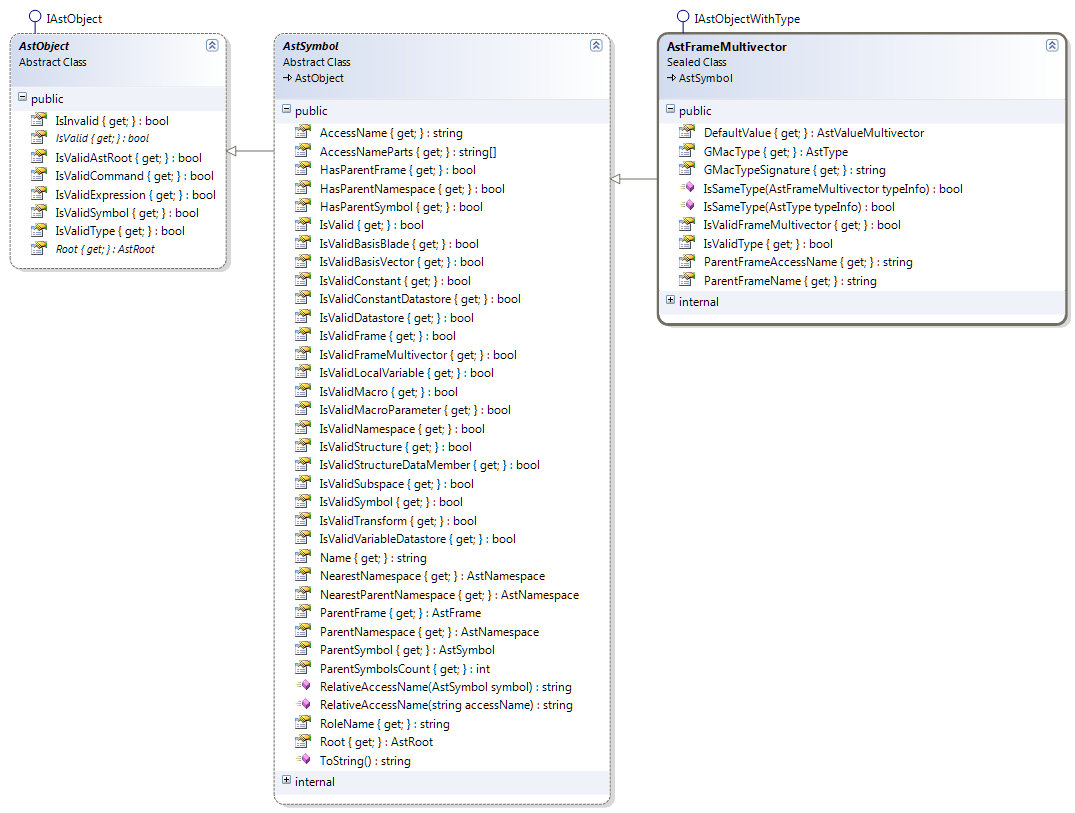 Each AstFrame object contains a number of AstFrameBasisVector objects to represent the basis vectors of the frame. The most important members of this class include: 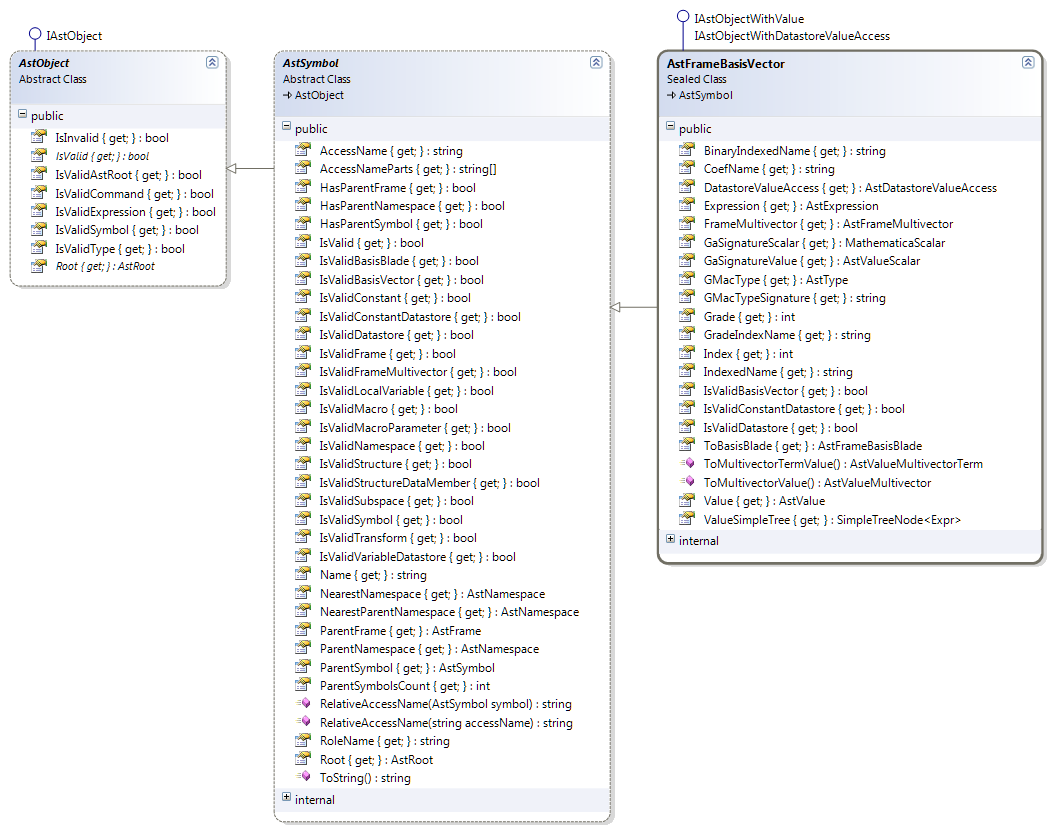 Each frame contains basis blades created from the outer product of basis vectors. The AstFrameBasisBlade node class represents a basis blade of the frame and contains many useful members: 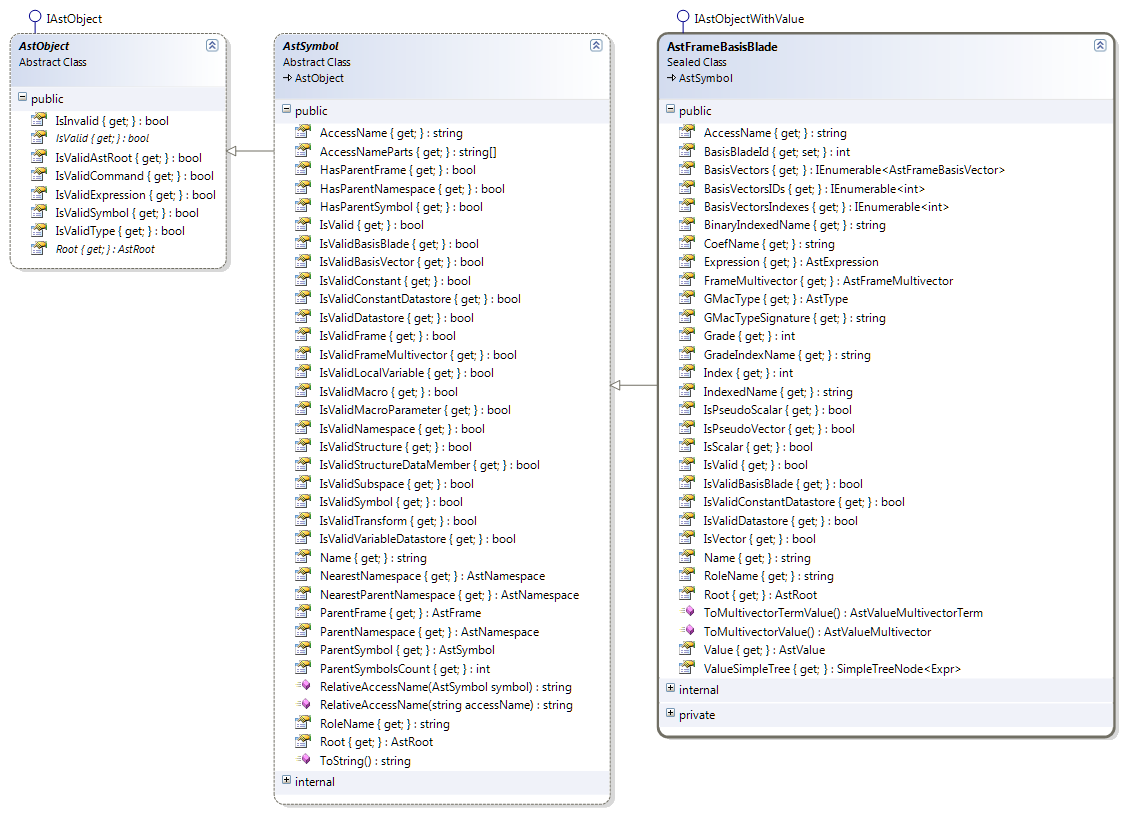 Inside each frame we can define one or more subspaces that are spanned by several basis blades of the frame. In addition, GMac automatically defines several subspaces when compiling any new frame definition. The AstFrameSubspace node class represents a subspace under a frame. The most important members of the AstFrameSubspace include: 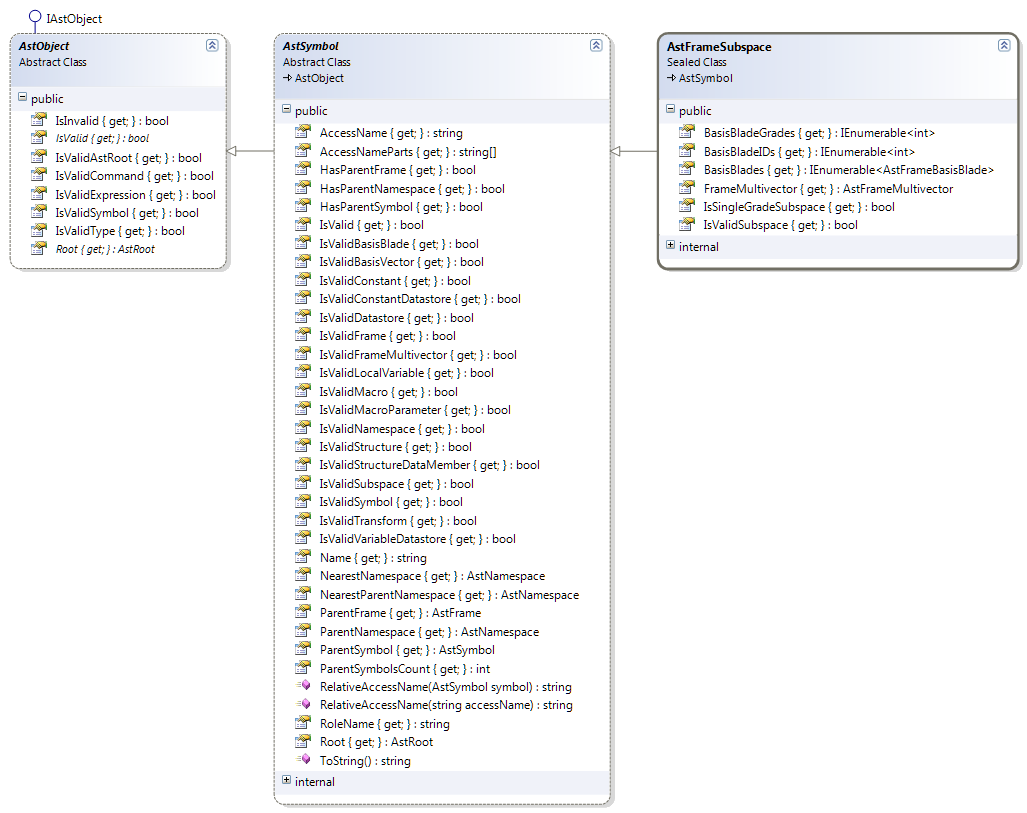 In GMacDSL, structures are combinatorial trees of geometric data used for grouping multivectors in a single container. The AstStructure node class represents a structure in GMacAST. The important members of this class include:

Each structure is a collection of several named data members having any GMac type needed. The AstStructureDataMember node class represents data members. The class has the following members: 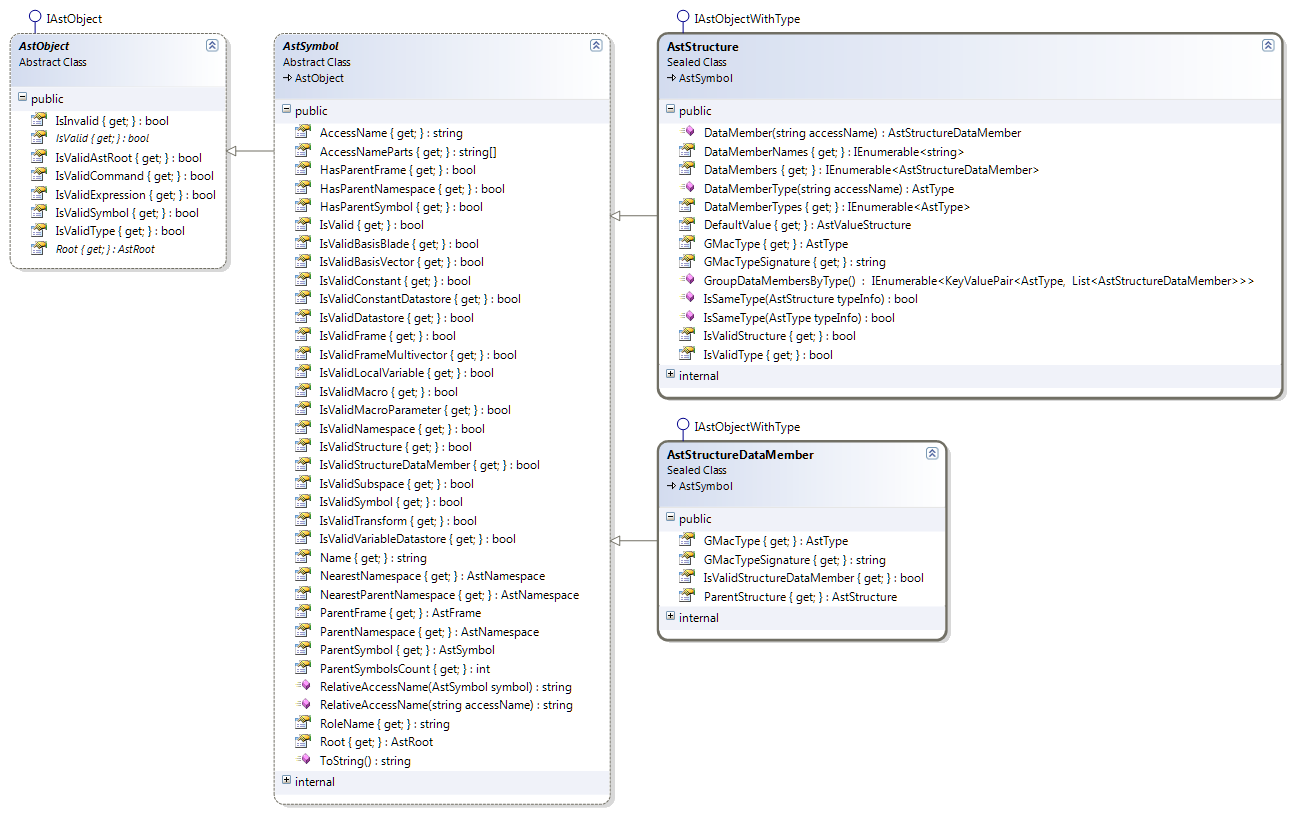 In GMacDSL, a macro is the main processing code element taking inputs, performing GA operations, and producing an output of any desired GMac type. The AstMacro node class represents macros and contains many useful members:

Inside any macro a number of parameters can be defined to act as inputs and output to the macro. The AstMacroParameter node class holds the information of macro parameters and contains the following useful members: 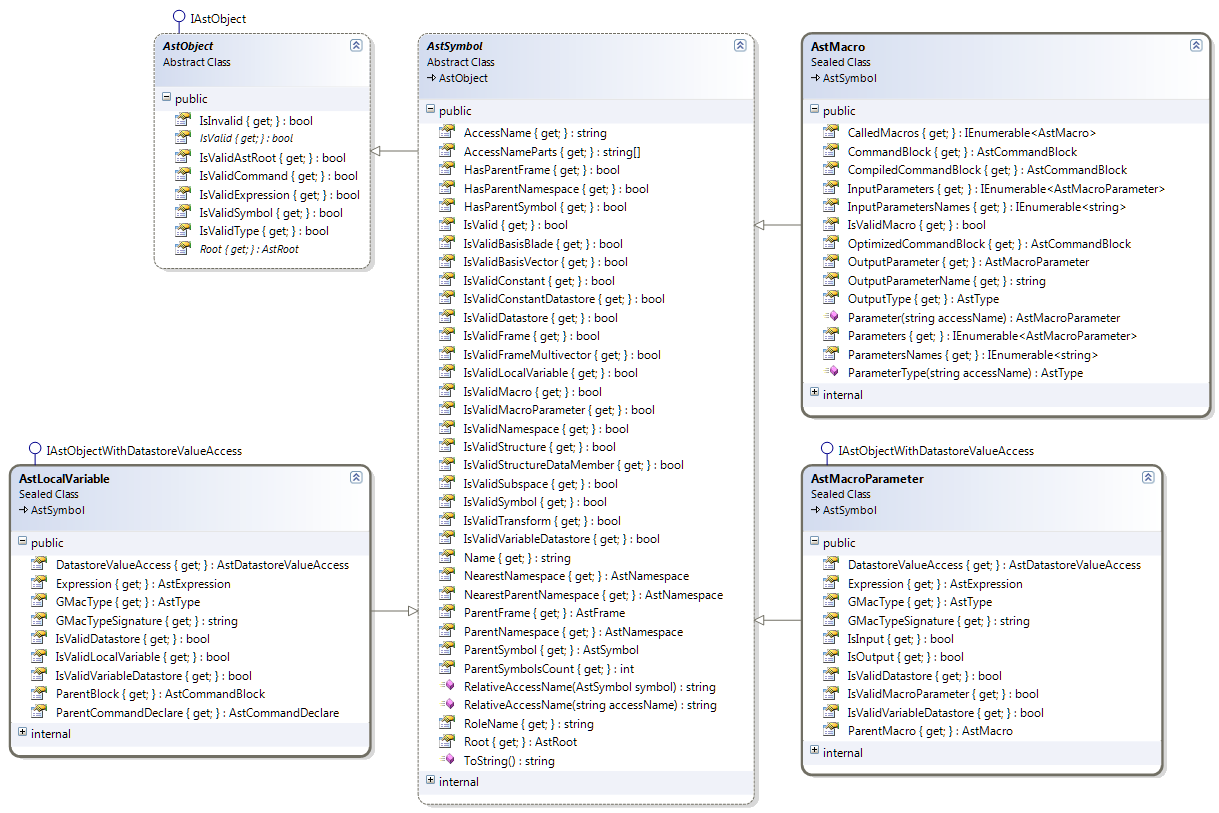 A graph representing macros and their dependencies for the sample code

A graph representing the optimized high-level components of the geometry2d.e2d.ApplyOM macro in the sample code

A GMacDSL constant is a named value that gets calculated at compile time and is substituted in any expression where the constant name is used in later code. AstConstant is the AST node class holding information about constants. The class contains useful members such as:

A transform in GMacDSL is a symbolic array containing constant entries that can be used as an outer-morphism or general linear transform on multivectors. Transforms are very useful in mapping multivectors between base frames and their derived frames based on Change-Of-Basis matrices in both directions (i.e. transforming multivectors from base to derived frame, and from derived to base frame). The AstTransform AST node class holds information relevant to transforms and contains the following useful members: 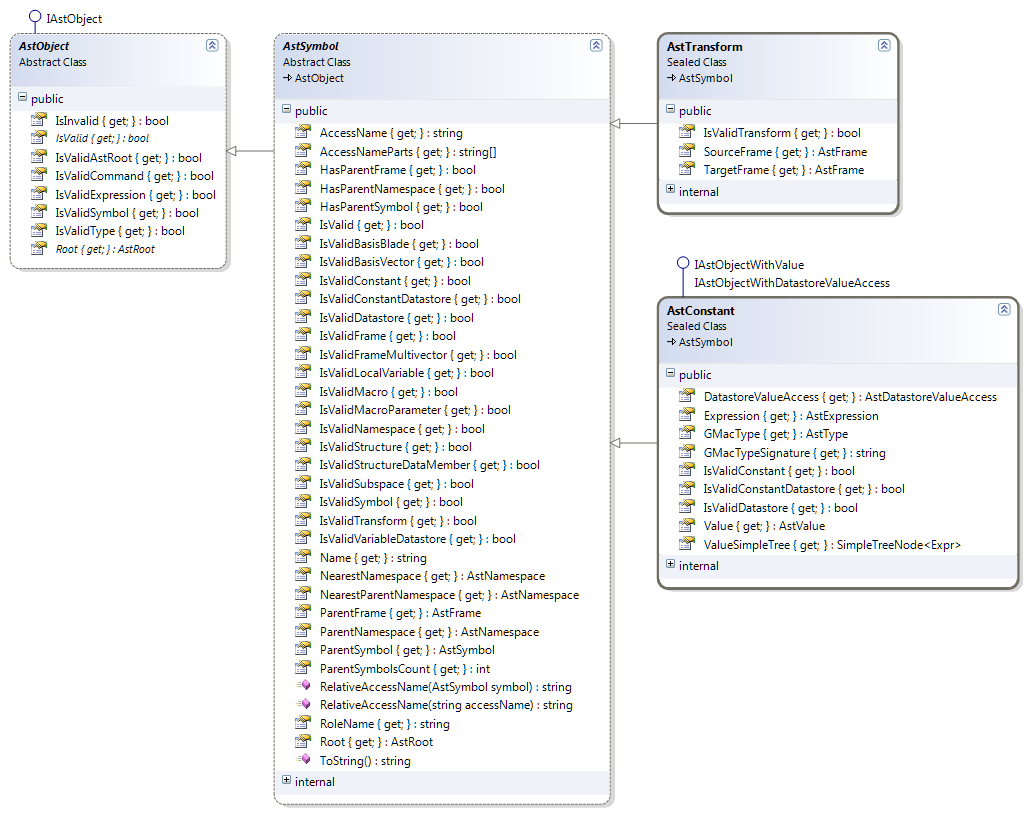 In GMacDSL like many other programming languages, specific types are used to designate the set of values and operations allowed on specific variables and other value data-stores in the language. There are three kinds of types in GMac: 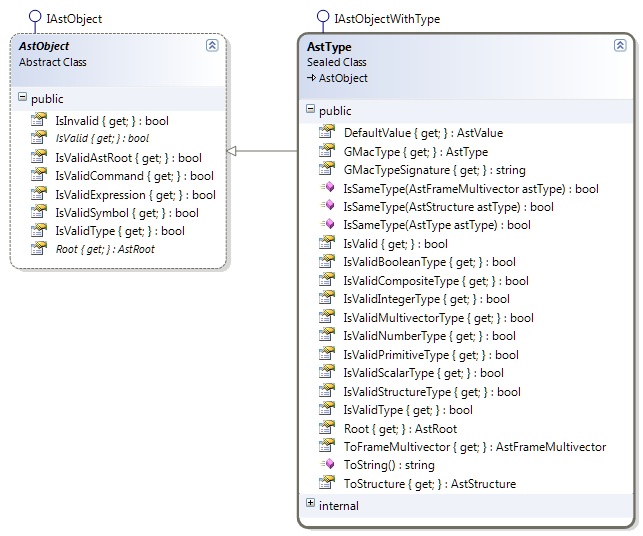 In GMacDSL a command is the basic unit of execution inside macros and composite expressions. Commands have several kinds represented by several GMacAST node classes.

The AstCommand class is the base class for all GMacAST nodes that represent commands. This class contains these useful members inherited by all derived classes:

The AstCommandBlock class represents information about a command block that typically contains other commands to be executed as a single grouping. Other command blocks and composite expressions can be nested inside the command block as desired in GMacDSL code. This class contains the following useful members:

The AstCommandLet node class holds information about the most important processing command in GMacDSL code, the let command. The let command assigns some computational expression to a data-store based on a local variable or a macro parameter. This class contains the following useful members: 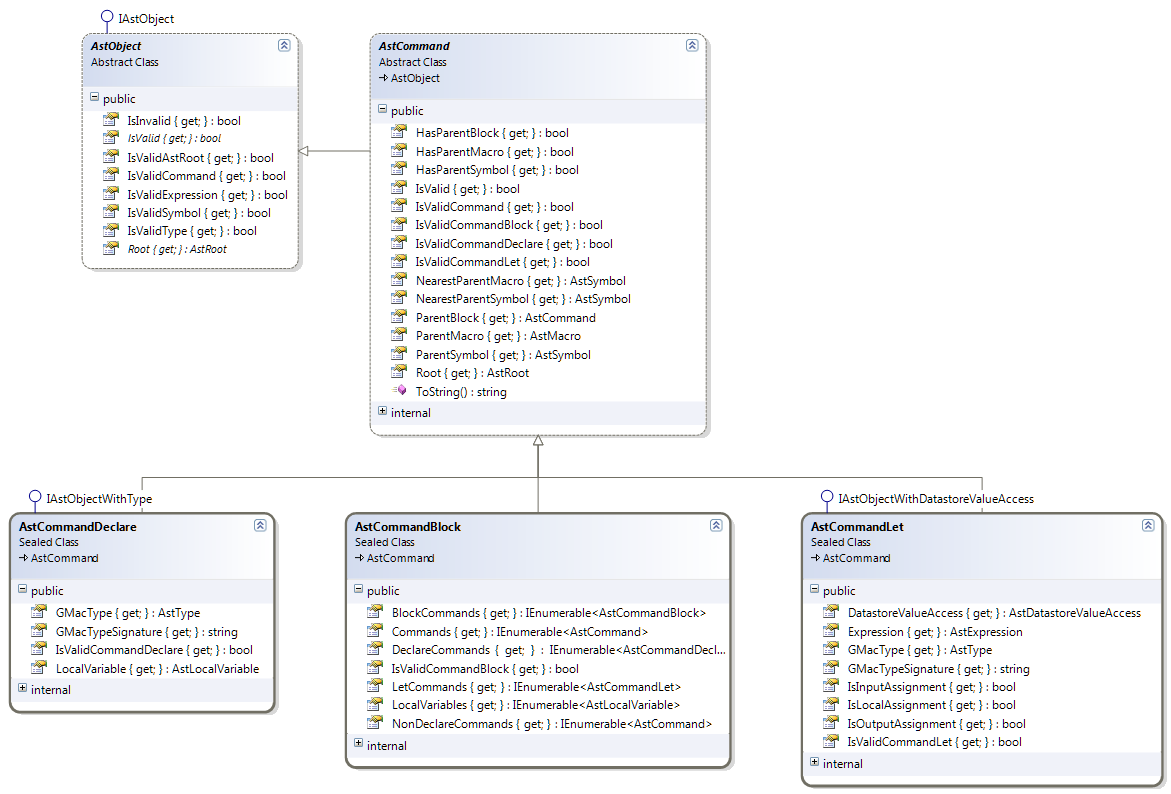 Computing in GMac is accomplished through the use of expressions acting on values. Many kinds of expressions exist to satisfy the computational goals of GMac. The AstExpression class is the base GMacAST class for all AST node classes that represent expressions. More details about GMac expressions can be found in GMacDSL Guide.

This class contains the following useful members inherited by its sub-classes: 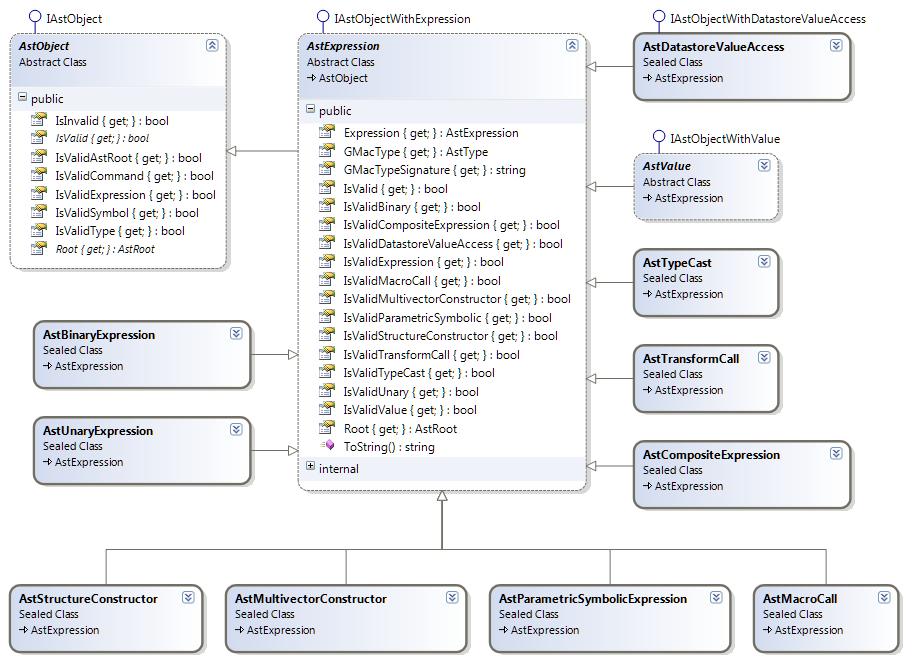 This class represents a unary operator expression like the negative of some value or the grade involution of a multivector. The Operand property holds the expression to be operated on while the OperatorName and OperatorSymbol properties hold information about the unary operator itself. 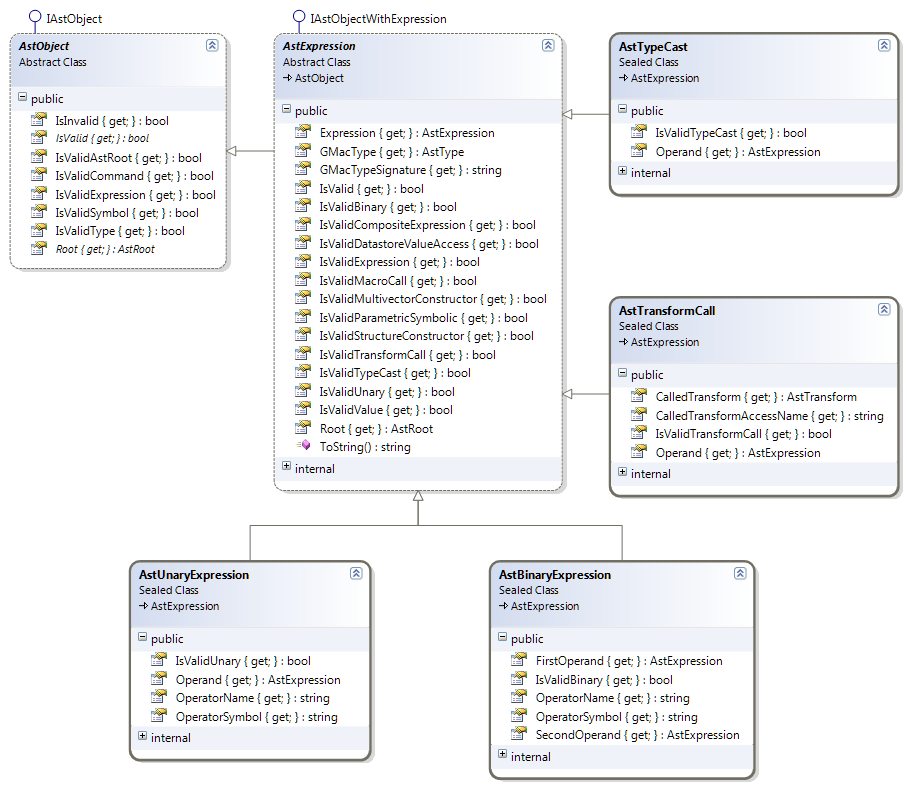 A structure constructor is similar to a multivector constructor but creates a structure of some kind. The AstStructureConstructor class represents this kind of expressions and contains the following useful members:

This class represents a macro call that assigns values to macro parameters. We can assign an expression to a full parameter or to a part of the parameter using a partial data-store value access expression. The class contains several useful members including:

As described in the GMacDSL Guide, the parametric symbolic expression is a simple form of inline macro that operates on a set of scalar parameters to create a symbolic scalar expression. The AstParametricSymbolicExpression class represents this kind of expressions and contains the following useful members:

A composite expression is simply a command block containing GMacDSL commands to be executed in order to compute a special output variable for the composite expression that will be returned as the expression’s final result. The AstCompositeExpression node class represents this kind of expressions and contains the following useful members:

In GMac, a data-store is a constant, local variable, or macro parameter that can hold a primitive or composite value that can be accessed in other code (i.e. read inside expressions or written to in let commands, and other similar code constructs). A value access operation on a data-store can be executed by fully accessing (reading\writing) the whole value (full value access) or by accessing a part of the value (partial value access). The AstDatastoreValueAccess  class holds information about such value access operations for GMac data-stores and contains many useful members: 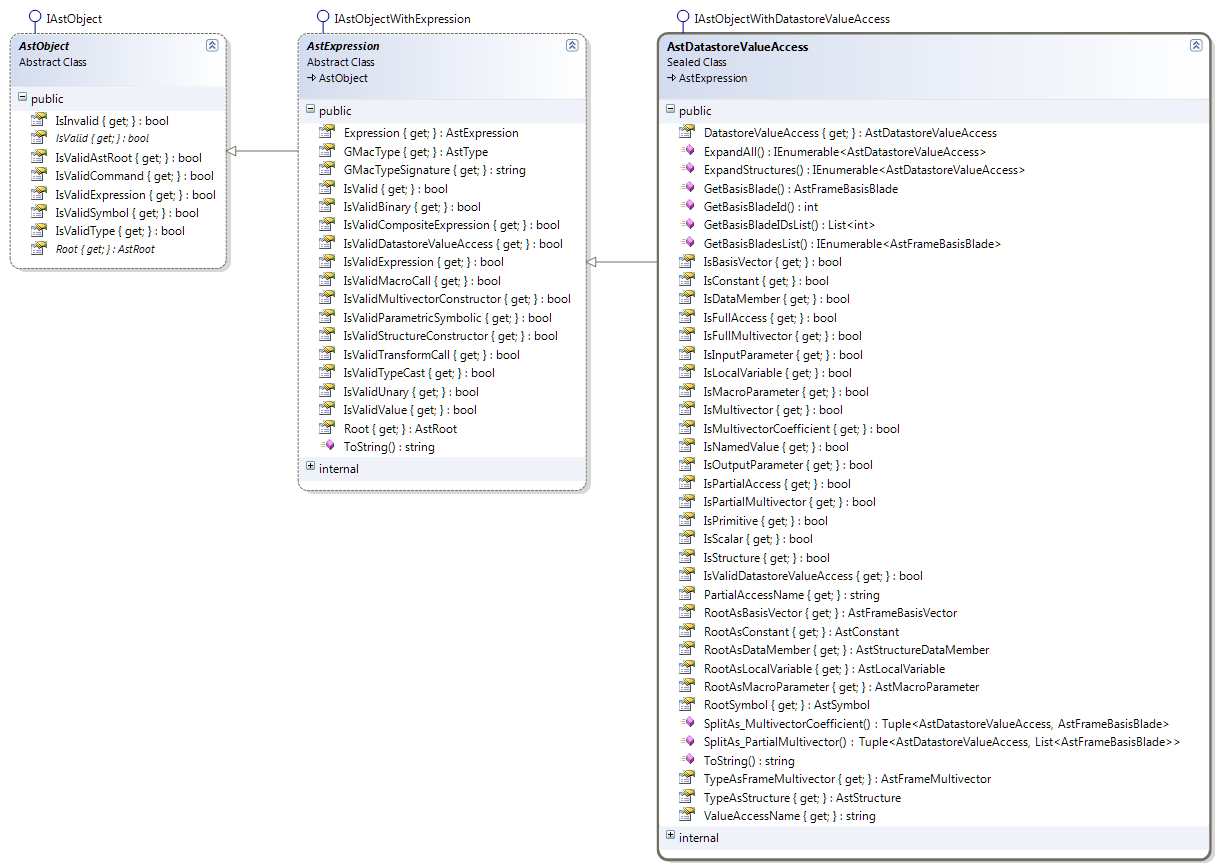 The simplest kind of values in GMacDSL is the primitive scalar value. The AstValueScalar node class holds information related to scalar values with some useful members:

A composite multivector value consists of several basis blade scalar coefficients with assigned scalar values, called terms, where a term is the ID of the basis blade and the scalar value associated with it. The AstValueMultivector class contains members to represent this kind of values:

A multivector value consists of some terms each having a basis blade and its coefficient’s scalar value. The AstValueMultivectorTerm class holds information relevant to terms and contains the following useful members:

A composite structure value consists of several data members with assigned values of proper types, called structure terms, where a term is the name of the data member and the value associated with it. The AstValueStructure class contains members to represent this kind of values:

A structure value consists of some terms each having a data member and its value. The AstValueStructureTerm class holds information relevant to terms and contains the following useful members: 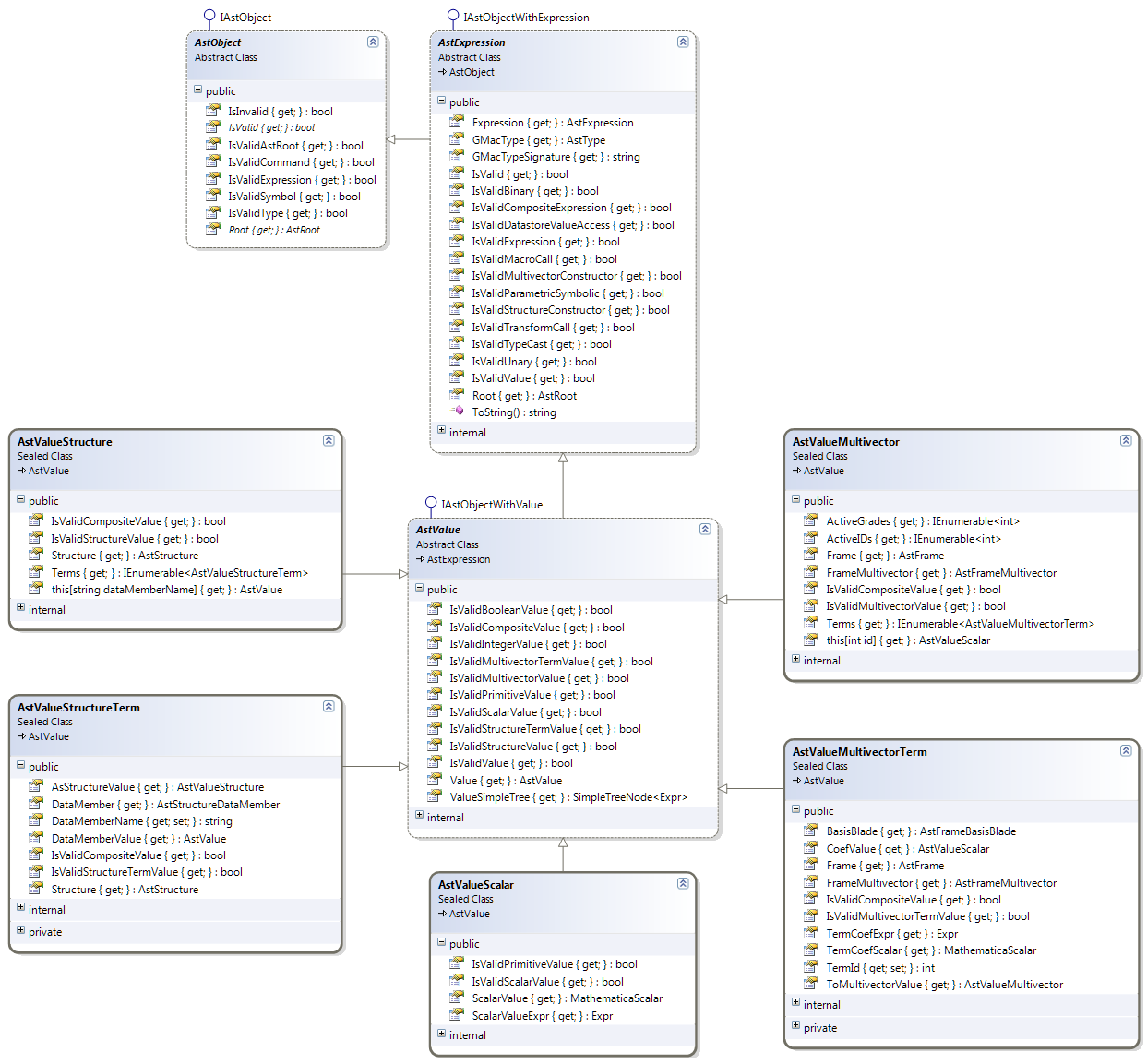 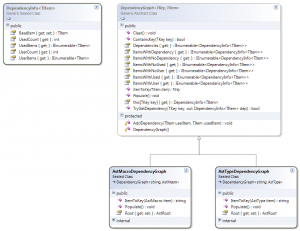 For each item (a GMac type in our example) we have the following information in the DependencyInfo<AstType> item dependency objects:

The AstTypeDependencyGraph class contains internally a dictionary of DependencyInfo<AstType> objects each stored by its type signature string of its base GMac type item as the key to the dictionary. 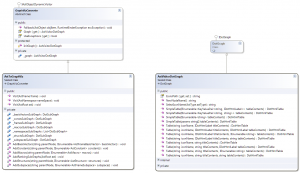 Many operations on AST nodes can be modeled as a visitor pattern on trees. The problem with this particular pattern is its tendency to add much unnecessary code just to pick the correct method to apply to a certain sub-class depending on its concrete type. Using the dynamic feature in C# made implementing this pattern very easy and elegant in GMacAST; see this article for more details. By implementing the IAstObjectDynamicVisitor or the IAstObjectDynamicVisitor<out TReturnValue> interfaces under the GMac.GMacAST.Visitors namespace, we can create a class to implement the visitor pattern and add any number of Visit() methods having a single input of any sub-class inherited from the AstObject class.

One very useful visitor implementation is done in the GraphVizConverter abstract class implementing the IAstObjectDynamicVisitor interface to be used as a base class for drawing diagrams from GMacAST nodes using the GraphViz composer explained in TextComposerLib Guide. An excellent sample for this fruitful combination is found in the AstToGraphViz class inherited from the GraphVizConverter abstract class where several Visit() methods are created to add nodes to the diagram based on the specific AST node class used.

To summarize the classes used in this task: