To fully understand the  TextComposerLib library’s capabilities, we first need to understand the text composition classes located under the TextComposerLib.Text namespace. These classes are designed to as text construction and manipulation components suitable for code generation as the main application. The text composers can be integrated for many tasks including scripting and template engine design.

The JoinPairs extension methods work on two string sequences to zip them together into another sequence of strings in various forms:

The shown code will produce this output based on the Concatenate method:

To see an example for the JoinPairs method, the shown code will produce this output:

In many cases a simple concatenation of strings is not sufficient. We often need to order the strings in some way as they come and then concatenate them in their current order, which can also change over time. One way to order items is by using simple data structures like lists, stacks, queues, and priority queues. A set of structured text composers can be used for this task. All structured text composers can be found under the TextComposerLib.Text.Structured namespace.

One such structured text composer is called ListComposer.  This composer is a list that can be populated with items like any .NET list structure. At any time the items in the list can be used to generate concatenated text from the individual items. Each item can have arbitrary prefix and\or suffix strings independent of the other items. The concatenated items can be separated by an arbitrary string in the final composed text. The final composed text can have arbitrary prefix and\or suffix strings of its own.

One final structured composer is the SequenceComposer that can successively append IEnumerable<string> sequences acting as the items to be composed into the final text. The main difference between this composer and the others is the use of the ActiveItemPrefix and ActiveItemSuffix properties. In the SequenceComposer items prefix and suffix strings are common among all items whereas in the other composers all items added before changing the ActiveItemPrefix and ActiveItemSuffix properties of the composer will retain their prefix and suffix strings because they are stored with the item in a  StructuredTextItem object.

We can also use the extension method  ComposeToList to reduce the required code:

To show how structured text that varies over time can be generated, the shown code can be used to compose this multi-line string:

The first elements 1, 2, and 3 are added to a stack composer using the ComposeToStack method with active item prefix and suffix strings set to a single quote '. Then the other items a, b, and c are added after changing the active item prefix and suffix strings into <  and >. Inside the while loop, the current state of the stack is concatenated into a string and added as an item to a list composer and the stack is popped.

The mapping composer, under the TextComposerLib.Text.Mapped namespace, works by dividing its input string into segments of text, stored in the MappingComposerSegment class. The segmentation is based on specially marked text inside the string. Then a transformation function or lookup dictionary can be used to transform the segments’ text into new text. The final composed text is re-assembled again from the transformed text of the segments in the same order of their presence in the original input string. Two methods of marking special text can be used, as can be seen in the SegmentMarkingMethod enumeration:

In the shown class diagram for the MappingComposer we can see several TransformUsing methods, under the MappedUtils static class, that perform the required transformations on the text segments. 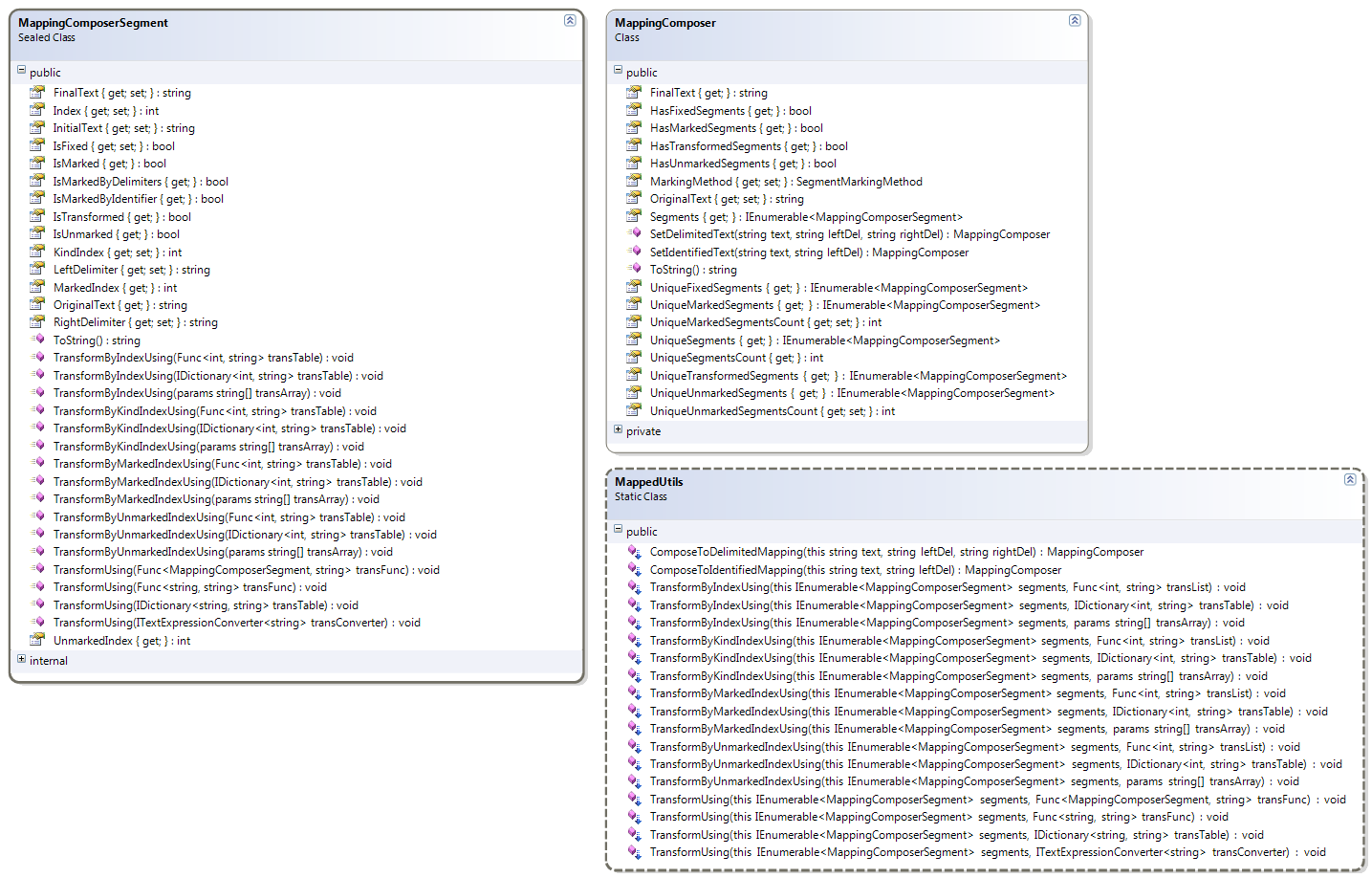 The best way to explain the operation of this particular composer is by following an example. Let us have the string:

The following code will make a simple substitution to replace @a by firstVar and @b by 5:

And we get the following output text:

As a more advanced example, let us have the text:

And we wish to transform this into a C# String.Format() method call string, perhaps as part of a code generation process, like this:

The SetDelimitedText()  method takes the initial text of the composer and the two delimiters. Inside this method, the mapping composer initially divides the input string into the following unique segments:

Note that the same segment may appear several time in the original text (for example $i$  appears 3 times).

Then the TransformByIndexUsing()  method is called taking a transforming function of type Func<int, string>; it applies the given transformation  index => "{" + index + "}" to each delimited segment (i.e. only the text of the segments $i$  and $id$  are transformed using their order of first appearance). The final text of the composer is then given by reconstructing all the segments in the same order but with replacing delimited segments text by their transformed text as follows:

The idea behind the LinearComposer is that we add text line by line and once we are on a new line we can’t modify any of the old lines anymore. This method of composing text is very useful when we are creating code files in a linear fashion that require consistent indentation and formatting. The LinearComposer has many useful methods to ensure control over the addition of new text lines. We can also add several line headers inside this composer to be added each time a new line is created to hold additional automatic text like date and time of line creation, line number, the progress of time as a stopwatch, etc. 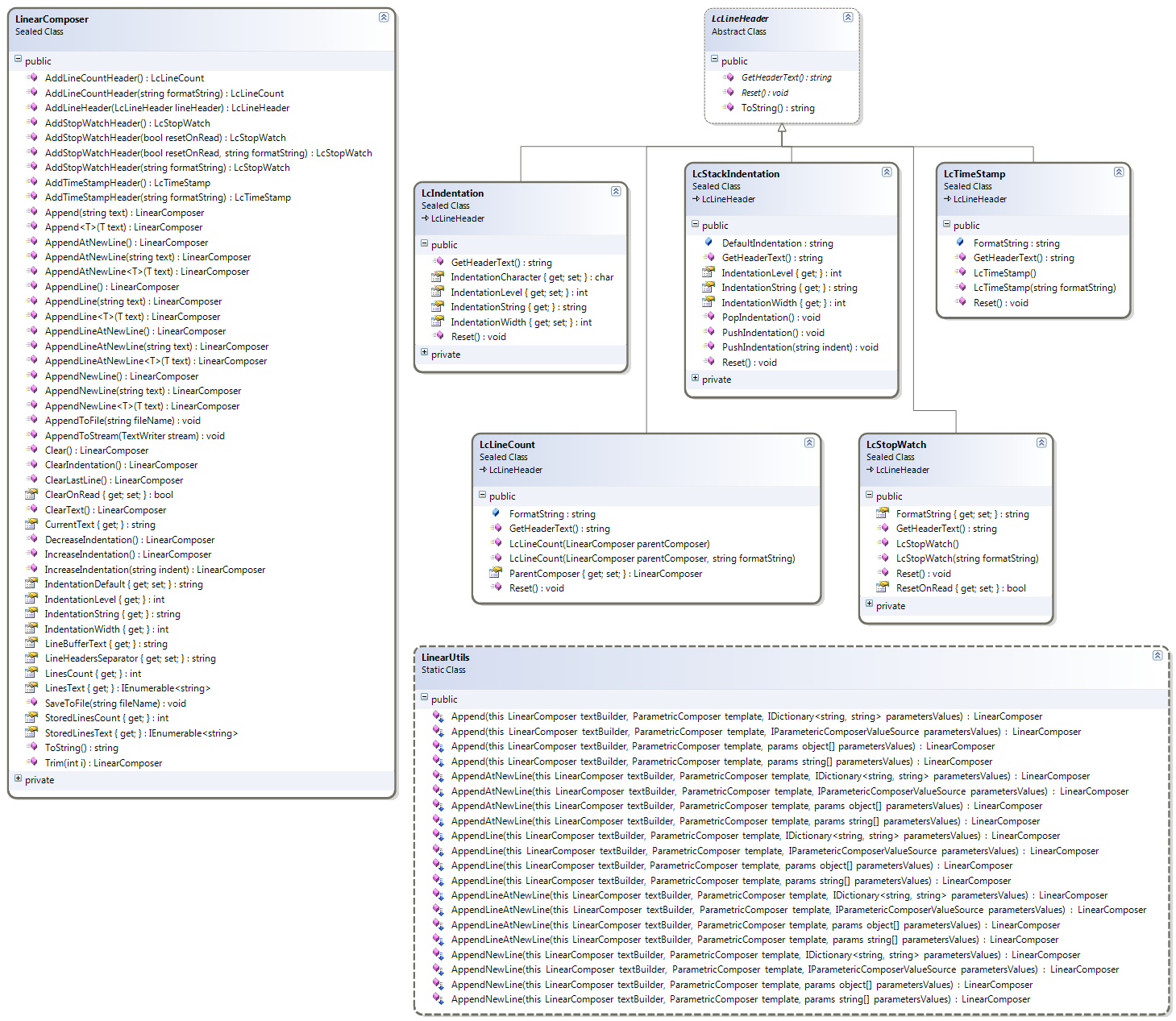 The LinearComposer class has several Append methods each having a specific usefulness:

A common feature of all the append methods is that when the given text is actually a multi-line string it is separated automatically into lines and each line is added and finalized except for the last one. This ensures the consistent addition of line headers, especially the indentation line header, as will be seen in the following examples.

An important feature of this composer is that we can easily create a new type of line headers by inheriting from the LcLineHeader class and using the AddLineHeader method of the composer.

The shown code can produce this block of text lines:

One very useful text composer in TextComposerLib is the ParametricComposer under the TextComposerLib.Text.Parametric namespace. In this composer we define a text template containing named parameters. Any single parameter can appear several times anywhere in the template. A substitution process is done to replace the parameters by string values to produce the final text. A parameter is implicitly defined using delimiters of arbitrary choice per template. Combined with other composers, we can use the ParametricComposer to generate almost any desired text files with predefined structure. 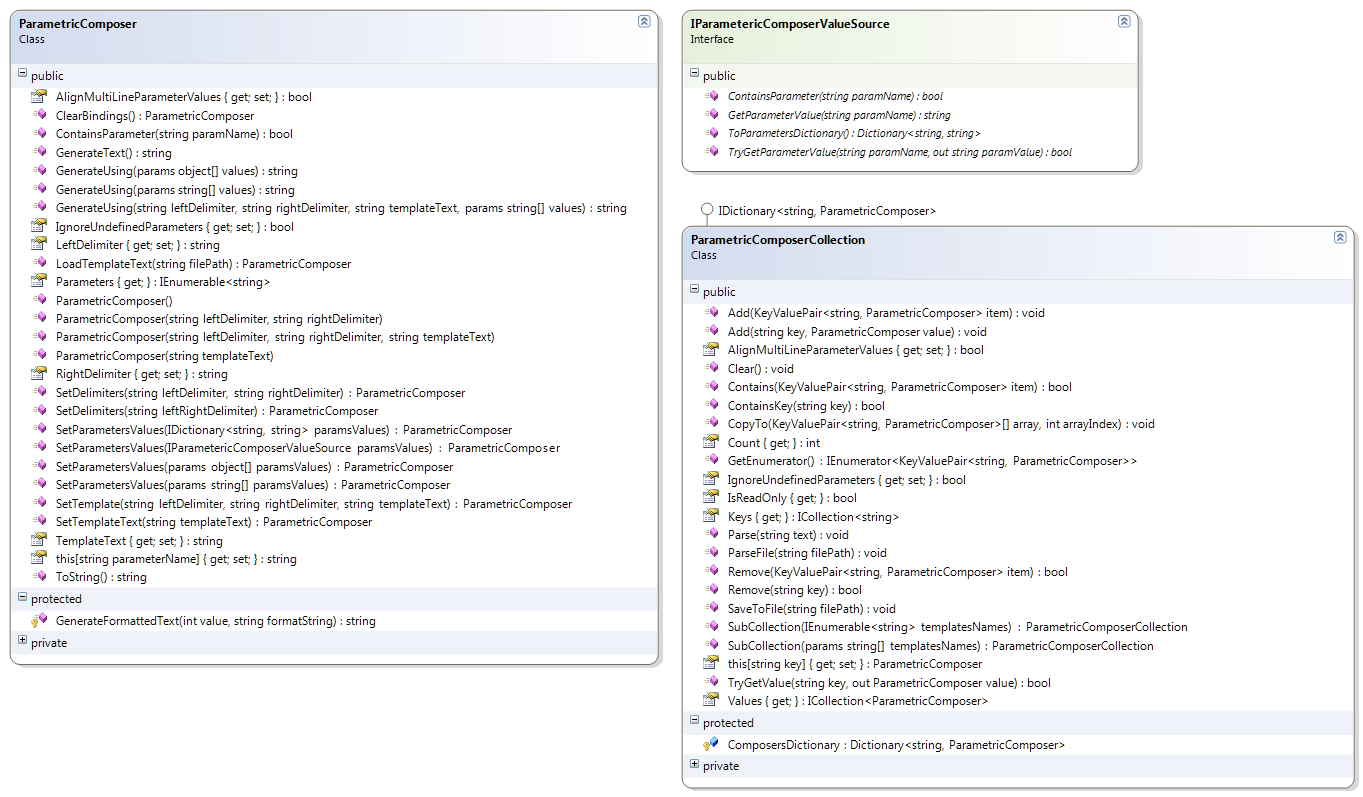 Another related class is the ParametricComposerCollection class that can be used to store and generate text from several templates at once. In addition, the ParametricComposerCollection class can be used to load the full definitions of a set of templates by parsing a text file containing the definitions. A user interface for this operation is present inside the TextComposerLib.Text.Parametric.UI namespace to make designing such templates easy for the user. The main windows form of the interface is the FormTemplateComposerEditor form.

The shown code will generate this block of multi-line text:

We can use several alternative methods to assign values to template parameters and generate the desired text. All the shown code blocks result in identical behavior. Note that in code piece 4 we call the GenerateUsing method to assign values to template parameters in the order each parameter first appears in the template. This eliminates the need for specifying the name of each parameter as in the GenerateText and SetParametersValues methods.

This example give an illustration of integrating several text composers to get the required results so it deserves special attention:

Under the TextComposerLib.Text.Region namespace we find several classes to create and manipulate text templates that can be used for code injection. The idea is to treat text in the template as a list of separate lines and group the lines, using line markers, into two kinds of text regions:

The text lines inside each slot region is further grouped into tags that can be:

So this is a two-level template engine that enable text injection under the slot tags of the slot regions. The classes holding this information are:

We can construct a template, to be used for text generation later, in these ways:

Finally the RegionComposer class contains an internal RcTemplate member and several methods to update its structure and generate text inside its slot tags. 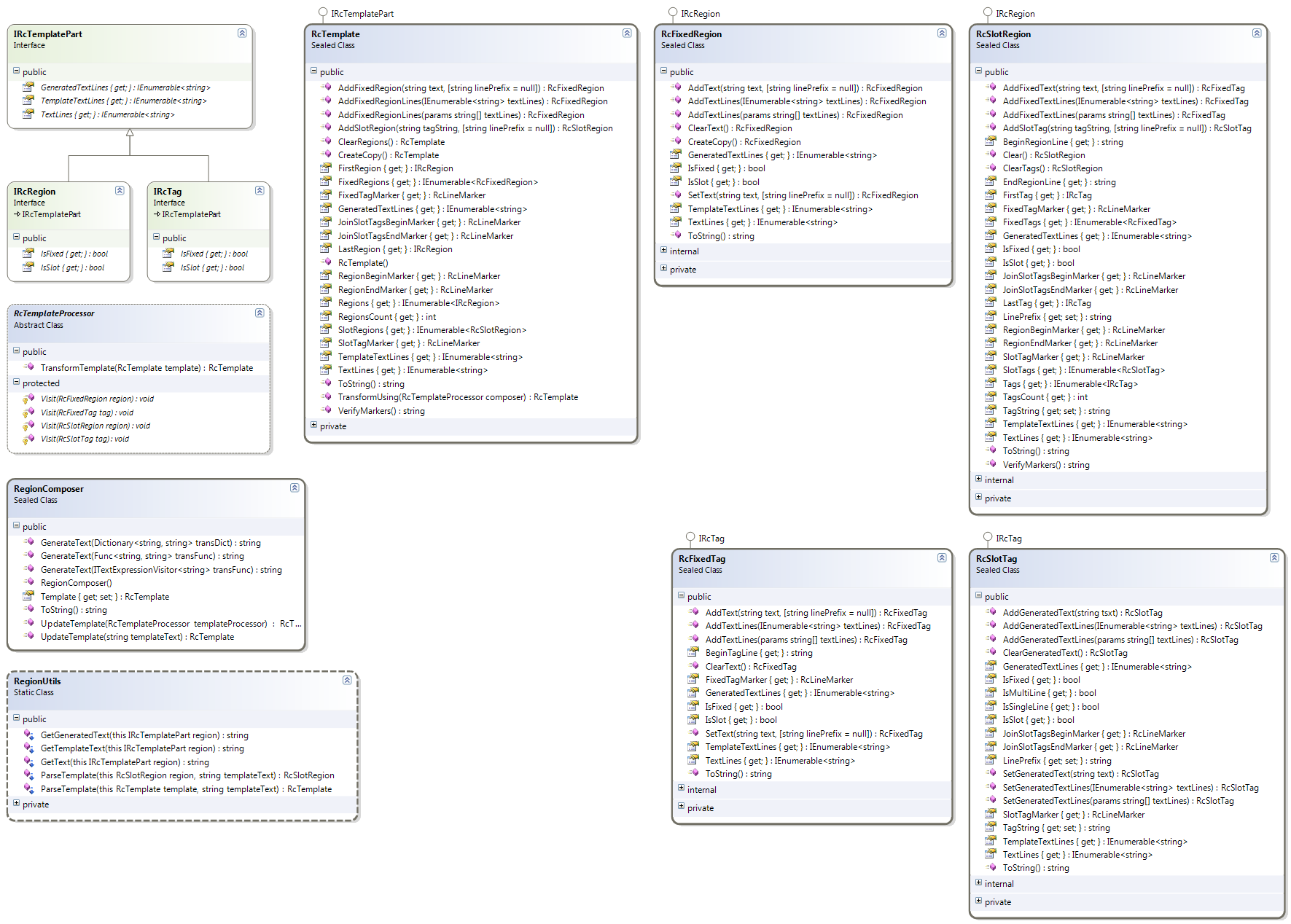